It can be intimidating to start your wine education. As you dig down into the soil bed of wine you can find yourself pushed up against thousands of years of nuance and history associated with the fabled elixir. There are important geographies, a unique lexicon, long histories that span across countries, famous vintages, and much pride that comes along with wine production. I

If you work at a restaurant or bar, or are just a curious consumer, there is a lot you feel like you’re missing when you’re dealing with wine. For me, one of those head-scratching moments comes from understanding the differences and similarities between French and American wines. In this post, I aim to help you out with some of those distinctions.

I first began to learn about wine in-depth while becoming a bartender at an upscale casual restaurant in Chicago. At the time, I wasn’t a wine drinker, so my palate was unrefined and my knowledge of grapes and regions hovered just above the zero percent line.

But, I was determined to learn.

One area that used to trip me up was the differences between European wines and American wines. I remember the “a-ha” moment that came when I found out that European wine labels generally don’t refer to their wines by the grape name, like Chardonnay or Pinot Noir. No, they identify wines by the name of the region in which they were produced. This distinction had always caused me grief. When a customer asked for a Bordeaux, I was at a loss. Which wine on our menu (we were not a French restaurant) was most similar to the Bordeaux?

This is when I was introduced to the basic idea of old world and new world wines.

The concept is relatively easy to understand. Old word wine refer to countries and regions that have a very long and documented history of producing wine. The most well-known old world producers are France, Italy, Greece, Spain, and Portugal. The new world wine producers consist of the United States, Australia, South Africa, and South American country’s like Argentina and Chile.

Winemakers from the old world refer to their wines by region name because these producers are firm believers in the concept of terroir. Terroir refers to the importance of the land, climate, and unique composition of the soil found in a particular grape’s growing area. This concept is why wines are referred to by region, because the terroir is seen as the defining characteristic of a wine.

New world wine puts a greater emphasis on the winemaker and the grape.

What follows is a quick cheat sheet for the uninformed wine drinker that will run down some major French production regions and the grapes associated with those regions. These are the wines I have personally been ask about the most during my time in the hospitality industry. If you’re a bartender or server working at a restaurant that doesn’t sell much French wine, particularly for wine by the glass offerings, this will increase the ability to Shepard your customers to the wine they really want. 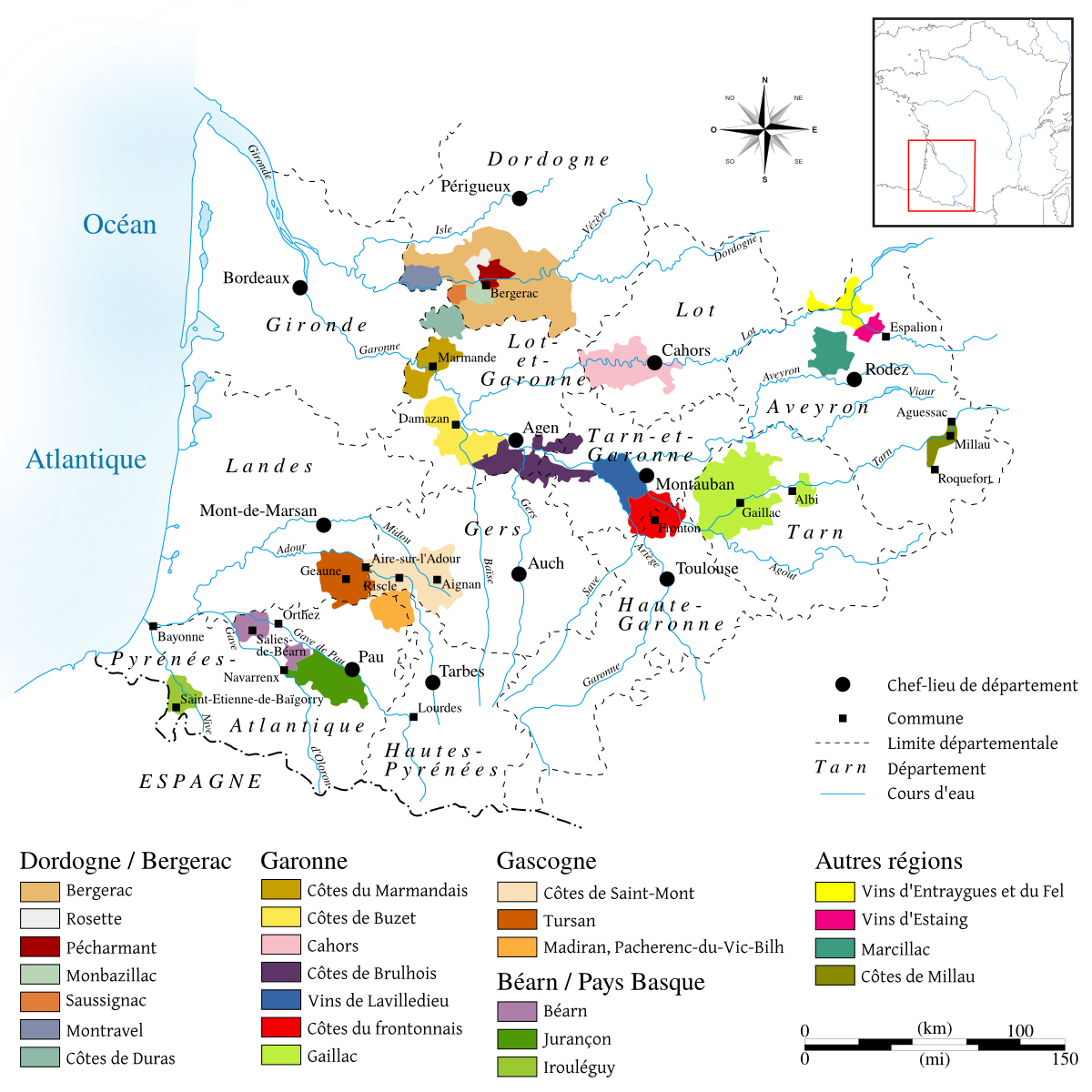 Bordeaux is the second largest wine producing region in France. It is also the most famous and lauded region of wine production in the country, and one of the most respected and well-known wine regions in the world.

If someone came to your restaurant and asked for a Bordeaux, they are generally asking for a red Bordeaux. Bordeaux is a coastal region in south central France that is bisected by the estuary Gironde. The estuary acts as an important geographical boundary.

The famous Merlot’s of Bordeaux are produced on the river’s right bank, in Saint-Emilion and Pomerol.

Outside of France, wine blends that are made with these wine varietals are called Meritage. If you’re customer comes in looking for a glass of Bordeaux, and you don’t have a one on the menu, steer them in the direction of Cabernet Sauvignon or Meritage blends. Like most old worlds, Bordeaux blends are lighter and more subtle than their new world compatriots.

If a customer wants a white Bordeaux, they are looking for light and crisp Sauvignon Blanc.

Located in north central France, the area of Burgundy (Bourgogne) is known as a region that produces expensive and unpredictable wines. The region is home to inclement weather that produces large variation between years. Food and Wine says, “it’s hard to think of a region with as much difference between vintages.”

Chardonnay is the preeminent grape in Burgundy.

A very well-known subregion of Burgundy is Chablis, which is in the north of the region. Chablis is known for it’s steely and dry Chardonnay with subtle notes. If a guest asks for a Chablis, offer them an un-oaked Chardonnay.

The second most well known subregion of Burgundy is Beaujolais. Beaujolais is produced from the grape, Gamay, a generally light bodied and fruity wine. This grape is also produced in California under the name Valdeguie.

This region in France’s southwest is split into two subregions: northern and southern Rhone.

The north of Rhone produces some of the world’s best Syrah. It is bold and spicy with boisterous black pepper notes. These grapes are thought to be one of the oldest varieties to be grown in France, with some experts claiming the grapes have grown Rhone since the days of the Roman empire.

Syrah is also grown outside of France under the name Shiraz. The grape is the largest produced varietal in Australia.

The south of Rhone produces Syrah as well, but where the northern Rhone makes wines that are 100% Syrah, the south is known to create wonderful blends and utilize the Grenache varietal as the predominant grape. The most famous wine produced in the southern Rhone is the blends of Chateauneuf-du-Pape.

For more wine information check out our article, Do’s and Donts of a Good Wine-by-the-Glass list.